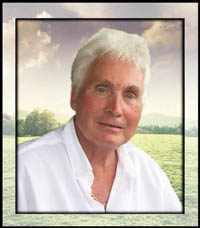 It is with profound sadness that the family of Harlow Donovan Otto announce his passing on August 31, 2022, at the age of 67 years.

Harlow was the third of six children to Violet and Allister Otto and was raised on their family farm near Elkwater. At an early age, Harlow developed a strong work ethic and an aptitude for farming and business. He became an integral part of the Otto farming operation. Harlow developed into an entrepreneur with savvy business skills. He was well known in farming circles as an innovator implementing new farming and ranching techniques. In fact, Harlow sold steers on the day he passed.

Harlow ran a tight ship and his meticulous nature was well known. It was often said that you could eat off the floors of his tractors.

As much as Harlow loved the business of ranching, his greatest accomplishment was as a steward of the land. His love of farming was not deterred by two very serious farm accidents, neither of which defeated him. Even when his mobility failed, he was driven to his properties and he made sure to inspect every blade of grass. But Harlow was not all business and farming, he was a jokester, he had a sharp sense of humour, and would tease everyone he met.

Harlow was the loving spouse of Lori Andreachuk for 22 years, the father to his beloved puppy Coco Chanel, and his two daughters Maegan Otto and Lauren Otto. Survived by his father, Allister Otto of Medicine Hat; siblings Gerald (Renetta) Otto of Elkwater, Dolores Otto-Moreno of Colton California, Clifford (Val) Otto of Medicine Hat, Marilyn (John) Dunn of Medicine Hat, Sheila (Colin) Clark of 108 Mile Ranch BC; and stepfather Joe Stenger of Medicine Hat; along with numerous nieces and nephews. Harlow was predeceased by his mother Violet Stenger and infant son Landon Otto.

Special thanks to the staff of Medicine Hat Home Care. If you wish to make a donation in Harlow’s memory, please donate to the Multiple Sclerosis Society of Canada by visiting mssociety.ca.

Condolences may be made at www.gracememorial.com. Arrangements are made by