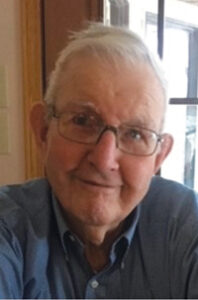 Robert (Bob) Goodfellow Armstrong of Bassano, beloved husband of Verna Armstrong, passed away in Bassano on Sunday, September 4th, 2022 at the impressive age of 97 years. Bob was born on January 5th, 1925 in Medicine Hat, to George and Anne Armstrong. He was the second child of five and the eldest son. Bob attended school in Irvine for two years, boarding with his Aunt Kathryn McLaughlin. He then attended Evergreen School, riding six miles on horseback with his siblings. The isolation of their home made education much more difficult and by the time all five children were in school, they hired a teacher at the ranch and had a school house for seven years. The winters were often harsh with deep snow, causing the family to be snowed in for several months. The ranch was isolated but Bob’s mom Anne was a welcoming hostess and wanted her children to have the benefit of a variety of company. Of course jobs like haying were onerous with horse, wagon and pitch fork. He had great stories to share: about difficulties with sheep, keeping food chilled in the icy creek near the house, fishing and the large picnics and dances at Grayburn Gap. He graduated from Olds Agricultural College in 1943. In 1946 the Armstrongs bought the Harry Jones farm, a mile south of Bassano. Bob moved in there to establish an extension of the ranch. It was here that he met Verna, the young matron of the Bassano hospital and thus began their 65 year romance. They were married in 1950 and shortly thereafter the East and West expanded their holdings to include the Teigland place, including some grasslands along the Bow. His brother Arnold and his new wife Shirley (Burrows) joined him at Bassano in 1953, leaving brother Peter in the Cypress Hills. Soon after the nearby Plumer place was purchased, giving Arnold and Shirley a home nearer to school. The three brothers continued the family ranch until 1981 when the ranch was split to facilitate involvement of the next generation. From the 50’s through the 70’s Bob and Verna raised five busy children. Bob was an involved and loving father and together with Verna, encouraged their family to participate in 4H Beef, hockey, swimming, music lessons, and school sports. They also fostered the children’s interest in the operation of the ranch, enlisting help with moving cows, haying, feeding cattle, branding, gardening, cooking and more. He and Verna believed in supporting the community. He was active on the Newell County Council for thirteen years, was a member of the School Board, the Hospital Board and the Knox Presbyterian Church Board and Session. He was a 70 year member of the Masonic Brotherhood and belonged to the Shriners and Kinsmen Clubs and was a member of the Western Stockgrowers’ Association. In retirement Bob and Verna moved from the farm into town and spent many years of their retirement golfing and travelling together. They were involved grandparents and he continued his interest in the ranch/farm in an advisory capacity. Central to his life was his family and times involving conversation, laughter and music. He was a great defender of the land, a lover of the flora and fauna. The family would like to express sincere gratitude to the staff and residents of the Playfair Lodge for their recent caring and kindness. Bob was predeceased by his parents George and Anne Armstrong, brothers, Peter and Arnold, and sister Kathryn (Ben) Plumer. He leaves to cherish his memory, his younger sister Betty Anne (Ralph) Burrows, sister-in-law Dorothy (Bob) Wall, daughters Gena LaCoste, Kathryn (Dick) Hornby, Laurie (Daniel) Steinbach, and sons George (Jan) Armstrong, and Tom (Della) Armstrong. He is survived by 11 grandchildren: Jill (Earl) Zimmer, Ross (Stephanee) Armstrong, Chay LaCoste, Ian (Kelly) Armstrong, Emily (Dustin) Devereaux, Diana (Graham Thompson) Armstrong, Liam Hornby, Hilary (AJ) Steinbach Ostrander, Connor (MacKenzie Henn) Steinbach, Claire Armstrong and Hale Armstrong; and 10 great grandchildren: Burke Armstrong, Leif Armstrong, Ivy Armstrong, Lilly Armstrong, Everly Armstrong, Isabelle Armstrong, Russell Zimmer, Bridget Zimmer and Finn Devereaux and Daisy Ostrander. Friends and family are welcome to a Celebration of Bob’s Life, which will take place at the Bassano Community Hall at 4:00 PM on Saturday, September 10th with Rev. Peter Baek officiating. Refreshments to follow. Bob will be laid to rest in a private family interment at the Bassano Cemetery. In lieu of flowers memorial tributes may be made directly to the Playfair Lodge through the Newell Housing Foundation https://newhf.ca/about/ or to the Knox Presbyterian Church, Box 66, 334 – 3rd Avenue, Bassano, Alberta T0J 0B0