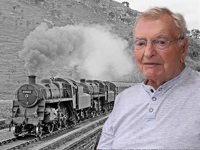 George Edwin Macauley of Medicine Hat peacefully left this world in the early hours of Tuesday, September 13, 2022, after a long and courageous battle with Parkinson’s Disease. He leaves behind his beloved wife of 69 years, Henriette Antoinette and his five children, Arnold (Darlene), Corinne Plamondon (Gilles), Marvin (Robin), Brian (Donna) and Julie Zwicker; nine grandchildren, Jan, Dawn (Arnold), Joshua, Kalen (Corinne), Erika, Kyle (Marv), Jael (Brian) Lauren and Hailey (Julie and Bill Zwicker) and ten great-grandchildren. He was predeceased by his parents, Alfred and Mary Evelyn as well as his siblings Wilf, Joyce and Kenny. George was very active in his children’s lives. He encouraged them to be the best that they could be and to pursue their own dreams. He was known to everyone as a witty, loving, kind man who was always willing to help anyone in need. He was also very active in the community, belonging to the Knights of Columbus, RC Legion, Order of Railroad Telegraphers and the CPR Pensioners Club. George was born on the family farm north of Mankota, SK., on August 17, 1930. Growing up in southern Saskatchewan in the 1930’s, he learned how to farm and survive in very difficult conditions. During the war, George and his older brother, Wilf kept the farm working while their father, Alfred served in the Army. In 1949, George began working with the CPR as a part-time telegrapher. In 1950, the Macauley family moved to Val Marie, SK., where both George and his dad worked for the PFRA at the Val Marie Dam. In the same year, he met the love of his life, Henriette Lebel at a wedding reception and they were married on August 17, 1953. George worked for the CPR as a Telegrapher, Station Agent, Operator and Dispatcher from 1949-1986, living in many communities in Alberta and Saskatchewan. He loved the railroad. After his retirement in 1986, and finally empty nesters, George and Henriette travelled Canada eventually hitting every province and territory with their truck and trailer. They also travelled to Europe and Mexico many times and did several cruises to Alaska and the Panama Canal. George’s life was full with lots of love and many wonderful memories with family and friends he met along the way. George’s family is very grateful for all the healthcare workers who contributed to his care over the past five years. The Funeral Mass will be celebrated at St. Patrick’s Roman Catholic Church, 238 – 2 Avenue N.E., Medicine Hat, on Monday, September 19, 2022, at 11:00 a.m. with Reverend Father Roque Pereira celebrant. Interment will follow at Hillside Cemetery with a time of fellowship thereafter in the Parish Hall. (Condolences may be expressed by visiting www.cooksouthland.com) If family and friends so desire, George would be honoured by donations made to the Parkinson Association of Alberta. www.parkinsonassociation.ca. Honoured to serve the family is