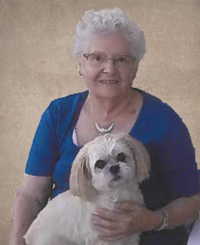 Urstla passed away peacefully in Medicine Hat on September 24th, 2022 at the age of 90 years. She was predeceased by her spouse, John; her brother, Fred St. Dennis; her sister, Peggy Merrick; and her parents, Bretta Belle (Pickwell) and Bert St. Dennis. She will be missed by her son, Bob (Ruth) Richardson and their children, Dana (T.J.) Lovell and Scott (Pamela) Richardson and their son, Hank; her grandchildren, Rylan and Noah Dent; stepson, Ronn Klassen (Judy Schulz); her niece, Betty Jane (Don) Briggs and her daughters, Bobbie Howatt and Tracie Henrikson; as well as many nieces, nephews, great nieces, and great nephews. Urstla was born on July 13th, 1932 in Quill Lake, SK but was raised in Winnipeg, MB. She married Ron Mervyon Richardson in 1952. Bob was born and Urstla and Ron divorced in 1964. She married John Klassen and became a stepmother to Ronn. They moved to Rivers, MB and then returned to Winnipeg where she worked as a bookkeeper until her retirement in 1985. Urstla was always a very creative person. She supplemented her income with her dressmaking and artistry abilities. Her skills included painting, sewing, crocheting, knitting, sculpting, and quilting. Later in life, her great passion was porcelain dolls; she won many awards. She enjoyed the Playhouse Theatre in Vernon, BC, where she excelled as a costume designer and maker. She also designed and created sets for many plays. This work continued when she moved to Medicine Hat, AB in 1998 to be closer to her son and his family. Urstla’s other interests included fishing, camping, playing car games (especially cribbage), and reading. She also volunteered at the Veiner Centre. Urstla was very involved in the church with women’s groups and Sunday School. She always loved animals; Minnie and Teddy were close canine companions. Those wishing to have coffee and donuts with Urstla’s family prior to the Funeral Service may do so at SAAMIS CREEKSIDE CENTRE, 1 Dunmore Road SE, Medicine Hat, AB, T1A 1Z5, from 11:00 am to 1:00 pm on Friday, October 7th, 2022. We will then proceed to the Funeral Service. The Funeral Service will be held at THE CHURCH OF JESUS CHRIST OF LATTER DAY SAINTS, 7 Sierra Blvd SW, Medicine Hat, AB, on Friday, October 7th, 2022 at 2:00 pm. Interment will follow at SAAMIS PRAIRIE VIEW CEMETERY. Lunch will be catered by The Church of Jesus Christ of Latter Day Saints Relief Society to be held at SAAMIS CREEKSIDE CENTRE after the Interment. Memorial gifts in Urstla’s memory may be made to the Alberta Pound and Rescue Centre (APARC), 1002 South Railway Street SW, Medicine Hat, AB, T1A 2W2. Condolences may be sent through www.saamis.com or to condolences@saamis.com subject heading Urstla Klassen. Funeral arrangements are entrusted to