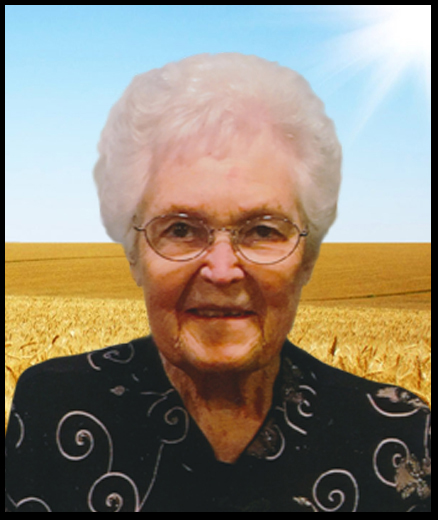 It is with profound sadness we announce the passing of our mother, grandmother and great-grandmother, Frances Elizabeth Miller at the age of 92 years, but rejoice in knowing she has gone home to join those that have gone on before her in the loving arms of her Lord and Savior Jesus Christ. She leaves to mourn her passing her children, Ron (Donna) Meier and their children, Lanny (Candice) Meier, Trevor Meier, Donald Meier and Aprill (Ryan) Hintz;  Don (Debbie) Meier and their children, Ian (Val) Meier and Kara Meier (Ryan Kingston); and Elaine (Floyd) Welk and their children, Traci (Darren) Cybulski and Deanna (Justin) Freimark; step-children, Dwen (Margo) Miller, Reg (Debbie) Miller, Robert (Lorraine) Miller, Kathy (Geritt) Kuipers, Pat (Birnie) Bornn, and Verna (Monte) Wright as well as numerous great-grandchildren. Frances was predeceased by her first husband, Gordon Meier in 1963; mother, Ivy Vockeroth in 1978; father, Andrew Vockeroth in 1989; brother, George Vockeroth in 1992; sister-in-law, Regina Vockeroth in 1986; second husband, Adolph Miller in 2016; father-in-law, Isaac Meier in 1988 and mother-in-law, Martha Meier in 1979. Frances married Gordon Meier in 1949, and  together began their life on the farm. This is also where their three children, Ron, Don and Elaine were born. When Gordon passed away, Frances stayed on the farm and raised her   family there, running the farm as well as working in the city to make ends meet.  She married again in 1973, to Al Miller and they continued farming until 2005, at which time they retired and moved into Medicine Hat.  Frances worked hard all of her life to provide for her family and was always there to support them. Everywhere she went she made friends and was a loyal friend to a multitude of people. Frances enjoyed going for coffee frequently with friends and up until a couple of years ago, continued the tradition with friends she went to school with. From a young age, she had a pen pal in Maine and was still in contact with her until recently. Frances was picked at the age of 9 to present flowers to the King and Queen during their cross country visit in 1939, but due to some miscommunication the train did not stop, although 72 years later in 2011, through the work of many people including reporters from The Medicine Hat News and the Prime Minister she was able to meet and present flowers to William and Kate during their visit to Canada. It was definitely a highlight in her life. The church was always a big part of Frances’ life.  She was always very involved being the pianist and secretary treasurer for more than 60 years.  Even well into her 80’s she volunteered by playing the piano at Senior’s facilities to provide music for the residents and filled in as a pianist at the Wellington and Chinook Village giving freely of her time. Frances was a person who seldom complained and if she said she was not feeling well, you better take her seriously as something must really be wrong. Thankfully Frances enjoyed good health for the majority of her life and it was only the last couple of years when she needed to move into an assisted living facility. The family would like to thank the doctors and nurses at Chinook Village and Masterpiece who took care of mom the last few years of her life as well as the doctors, nurses and staff on 5 East and at St. Joseph’s Home for their care and compassion showing her respect and dignity during her final days.  You treated Mom with special care and we appreciated it. If friends so desire, memorial donations in Frances’ name can be made to the Church of God, 9 – 11 Street SE, Medicine Hat, AB.,T1A 1S2, (pentchur@telus.net), or to The Kidney Foundation, 6007 – 1A Street SW, Calgary, AB., T2H 0G5. A celebration of Frances’ life will take place at Hillcrest Evangelical Missionary Church, 3785 – 13 Avenue S.E., Medicine Hat on Friday, October 7, 2022, at 11:00 a.m. Those wishing to pay their respects may do so at Cook Southland Funeral Chapel, 901 – 13 Street S.W., Medicine Hat, on Thursday, October 6, 2022, from 7:00 p.m. to 8:00 p.m. and then again at the church on Friday  starting one hour prior to the service.  (Condolences may be expressed by visiting our website at www.cooksouthland.com).  Honoured to serve the family is