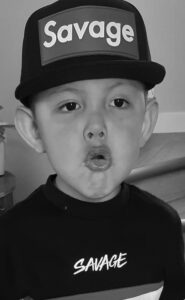 The King was born June 20, 2016 in Lethbridge, AB to Deidre and the late Godfrey Shawn Shouting. From the moment he came into this world he captured his gwama Vivian’s heart and was the first to greet him, and then his Papa Dion. After he left the hospital, he came home to his Papa’s house on the Blood Reserve where he resided until his passing. Papa Dion was so proud to have a grandson and claimed Kingsley as his “son”. They were inseparable and established a daily routine; in the mornings washing up, eating breakfast, and heading outside to do chores and yard work. His Papa loved him so much and had great plans for him, but sadly he lost him on January 16, 2018.

Kingsley loved his parents so much. After the loss of his dad Godfrey, he showered his mom with so much hugs, kisses and love. Kingsley enjoyed making paintings for his mom which she would proudly display for him. He was always so excited to spend time with his cousins, Jordyn, Taylor and Kaydence, whom he had his own special names for. He also spent a lot of time with his aunties DJ, Lorilee and warming up to Delaine. Kingsley and DJ were constantly bumping heads because he had to always be right. They went on many adventures, including playing at the waterpark every summer. He would follow DJ around in his Lamborghini while she mowed the lawn. Kinglsley and DJ had a special bond like no other, he knew to come to his auntie-mom if he needed help to fix his toys. DJ would show him how to fix them and he was such a very proud little boy, because he would teach himself how to do things on his own. His outdoor activities consisted of daily walks with Aunty Ga Ga, climbing the hills with his pets trailing behind.

Kingsley was a very energetic, inquisitive little boy, helpful and smart, and forever asking questions. He spent the majority of his time with his Gwama, so much, that he started sounding like her, even picking up Blackfoot words with his own translation. They played board games together; snakes and ladder, monopoly, sorry, scrabble and he just started learning to play Yahtzee. He would get upset if he won because he wanted Gwama to win. He loved bedtime spent with Gwama, her reading “Grandma Loves You Because You’re You” to him.

Kingsley was so multi-talented and grown up, he would answer the phone or return calls and politely ask “Did you call?” When he missed Aunty Woo Woo he would call her to come home. King was so happy when his Gwama bought him a globe and he learned where the polar bears, penguins, gorilla and elephants lived. He was so helpful in many ways, such as, when garbage day came he would be ready with the garbage and helping his friend Ivan Day Chief with loading up the garbage truck.

He enjoyed watching Halloween to the point he dressed up like Michael Myers this past Halloween, wearing the mask daily. He never tired of watching his favorite movies, The Addams Family, Thomas and Friends, Peppa Pig, Sponge Bob, Max n Ruby and Boss baby.

A few of Kingsleys favorite songs were “Believer” by Imagine Dragons and the theme songs for Halloween and The Addams Family, listening to them over and over and over again.

Kingsley was a certified Conductor, receiving his certificate from Thomas and Friends University at Heritage Park, Calgary Alberta. He enjoyed collecting toys, he had over 50 Thomas and Friends trains, which were his pride and joy, 50 hot wheel cars that he neatly displayed, and his favorite dump truck and tools.

Our “King” will be greatly missed by his family.

The family apologies for any names that were missed.

A Public Wake / Visitation will be held at CORNERSTONE FUNERAL HOME, 2825 – 32 Street South, Lethbridge, AB, on Sunday, April 25, 2021 from 6:00 PM to 10:00 PM. Due to COVID-19 restrictions, attendance will be limited to 20 guests at a time. Kindly RSVP your attendance to Cornerstone at 403-381-7777 or care@cornerstonefh.ca Facemasks are mandatory and will be available upon entry. A private Prayer Service will be held at 7:00 P.M. with Deacon Cliff Bogdan officiating.

The Funeral Mass will be celebrated on Monday, April 26, 2021 at 11:00 A.M. with Father Kevin Tumback celebrating. Both the Prayer Service on Sunday and Funeral Mass on Monday will be live streamed and may be accessed via Kingsley’s obituary on the Cornerstone website.

Kingsley will be laid to rest in St. Mary’s Cemetery.